How do you envision relationship with God? We all have different images and ideas. Some are good and some like mine for a long time were anything but good.

Many years ago when I had a dramatic "Born Again" experience there was a term that was used frequently in those days. New converts said that they were walking with the Lord. I am sure that has a lot to do today with how I view God.

I view my life as a path. Picture a huge forest with magnificent trees, plants, and the natural floor of the forest. Next picture a clear winding path through those woods. 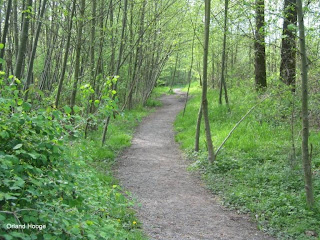 This is my most visual image of relationship with my Father. I see us walking easily and firmly on the path. We are talking and he is holding my hand much like a Daddy would a small child. I choose at times when the path is less clear to wander off the path. Does he punish me or is he angry when I stray? No. Absolutely not. He waits patiently for me to return to our walk together. Does this mean he  pulled his spirit from living in me because I strayed off the path? No, not even for a moment.

These times when I should just rest where I am with him but choose not to and go it alone under the power of my own steam are when I feel disconnect. As I navigate through the brush and find my way back to the trail he is waiting graciously with hand held out ready to resume our walk together.

The path means a great deal to me. Most of my life I had both feet defiantly outside the path determined to seek the things I thought were important. Other times I tried to walk one foot on the path and one foot off. The path no longer smooth I stumble as the terrain is rough.

God knows even in my darkest days I refuse to be anything but honest with him. What's the point? Can any of us deceive God? So when I was angry with him as I spend several decades being just that I told him exactly how I felt.

Now I say, Lord I want to walk with both feet on your path, holding your hand, and when I stray gently lead me back. I have no desire to be off the path whether it's with two feet or even one. I have all I need with so much more to come when I walk hand in hand, down this path of life with you by my side.

That is my image. What's yours?
Posted by billybeasleyblogspot at 8:12 AM 2 comments:

Ugliness Of A Fast Paced World


We have all stuck our foot in our mouth at various times. Some more than others. Some intentionally and some not. Some of us recognize when we have done it and some don't have a clue because honest introspection is not their strong suit.

I enjoy many aspects of technology but at the same time it allows an avenue to speak to many without having time to reflect on what we are saying.  There is also a record of it that remains forever. Make a foolish mistake today and it may well be on You Tube 20 years from now.

That is bad enough but then there are people who live to be ugly. Read an article in a newspaper like USA Today and then scroll down to the comment section. Things that are not even political become just that. Both sides so certain that they are right with no room for error in their opinions.

Recently former president George Bush underwent a heart procedure and of course it was in all the papers. The curiosity got to me. Sure enough among the well wishes were the vicious ugly comments. One person wrote that the alcohol and cocaine had caught up with him. The person seemed quite happy to gloat about the health concerns of another.

What about sports, which I also enjoy? The ugly vicious things said about people on the other team that we do not like. Do we forget that they are someones child, brother, sister, spouse, or friend?

Several years ago a prominent coach fainted during a game. Later I heard a well educated professional that rooted against that team admit that in a conversation with a friend that one of them said, "Tell the truth. Didn't you hope that he did not get up again?"


James 1:19 My dear brothers and sisters, take note of this: Everyone should be quick to listen, slow to speak and slow to become angry,

Lord help me to do what James said in all circumstances, even when people view things differently then I do.
Posted by billybeasleyblogspot at 7:34 AM 1 comment:

It was early last year when after decades of wanting God's favor without my willingness to follow the path that only He has laid out that I surrendered fully. I did not run up a church aisle, or shout from the rooftop. I was driving down the road and I simply said, "God, I have made a mess out of my life. Please you take the wheel."

We are called to be humble lovers of God and people but a valuable lesson that I have learned is that it is okay to pat myself on the back.

Maybe the most encouraging thing for me personally is to at times not even recognize the man I once was. Now please understand I have miles of growing to do. I have not arrived. But a situation will arise and my prospective is so different than what it once was that I can't help but quietly say, "Thank you God for not giving up on me."

Recently I read The Circle Maker by Mark Batterson and the one part that resonated with me the most was when he wrote about not only prayer for open doors but closed ones as well. Sometimes we want a door opened so badly that we want what we want and we ask God to grant it to us. What if that is not the door God wants opened? Most of my life I would have said well let me have it anyway and I will catch up with you later. 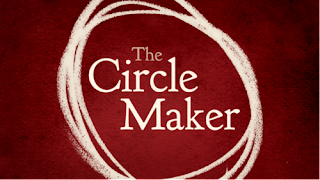 I have a dream that I have chased on and off for several years. There was a time it was my idol. It was that important. It was not a bad dream or something evil. It was just an accomplishment that I somehow felt I needed to be fulfilled in my life here this side of the veil. Now while nothing is concrete someone has expressed an interest in possibly making this dream come true.

And I truthfully say, "God if this is not a door we are walking through together then please close it."

And the Father I have come to know joins me with a little loving pat upon my back.

Posted by billybeasleyblogspot at 6:00 AM 2 comments: