Marriage Should Be Work?

I never cared for the relationship advice about how you had to work at it. Don't get me wrong. I understand the premise, but it always made it sound more like a job to me. Relationships while none are perfect should be fun & enjoyable..If not, I am not sure what the point is.
As Julie was backing out the drive this morning & both of us giggling about my silly antics. I thought about all the laughter we share with each other. How we are grateful for new opportunities that will allow us to spend more time together.
It is no secret that I have been around the block a few times but once I let go of what I thought I needed, God provided me with more than I could ever dream of with Julie. And Julie was & is His child. A child He loves dearly. 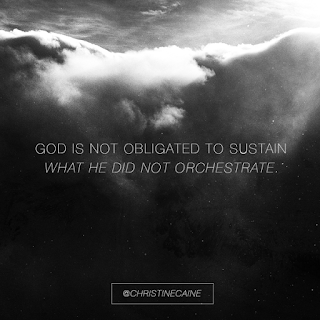 I think it is safe to say we have all charged down paths we knew not to be good for us with the thinking that we will invite God in on the back end of our deal. This above tweet from Christine Caine I found to be very succinct & powerful.
God is not obligated to sustain what He did not orchestrate.

I lived like this most of my life. Charging ahead from one adventure to another & always leaving God on the outside of what I desired. I fully intended to bring Him in on the back end after I got everything I wanted.
Big shocker here. It was an epic fail.

But I reached a point when everything I had tried failed. It is like all the years I spent coaching kids in the great sport of basketball. One of our favorite things that my assistant coach, Richard Mears & I said to kids so frequently that I am sure they rolled their eyes at us. "Good habits breed good habits & bad habits breed bad habits." For example, you have a kid who has repeated a bad habit so often that it feels natural to him. You try to convince him to change because he lacks proper form. His complaint would be it does not feel right. My response was, "But your way is not working. What do you have to lose?"

That was me. I reached a point where I had to come to grips that my way was not working. I trusted my thinking of what was right for me more than I trusted God.

"God, I do not wish to be alone forever but if You are not in it I would rather remain alone for the rest of my life because it will fail like all the rest." That was the place I finally reached.

I don't know that anyone that knew Julie & I before we begin to date that would have said, "Now they would make a great match." But yet looking back I have no doubts that God was preparing both of us for our eventual meeting.

I have been very blessed on occasion to have witnessed the Supernatural works of the Holy Spirit. Times when I knew without question it was as the wonderful Christian Author, Mark Batterson wrote, "Sometimes God shows up. Sometimes God shows off."

Two months before I met Julie I was in the shower. Don't you love how God does not stand on pretense? He wants to come in it & does not matter what you might be doing.

As clear as someone in the room speaking to me I heard. "Get your house in order." What? What does that mean? I thought about it for several days and then I kind of forgot about it.

Fast forward a few months & Julie & I are on our third date & it is the first time she was in my house. She was seated at the kitchen table and I went in the back for something & I felt that tug & reminder of what I heard in the shower that day.

I sat down next to her & shared the story. Her eyes glazed over & she made me repeat it again. "Say that again. Just like you said it the first time."

I did. She shook her head. "I heard that same thing recently. In fact, I heard it multiple times. I asked God what it meant and He said, The man I have for you is coming and he is coming quickly." She had been alone for ten years waiting on her Boaz.

I don't remember anymore of our conversation that day. What we both took away was that God made it clear that if our two paths merged to one-He would be on board. He would bless us. We still had to sort through things because we both had our share of scars. We are not robots. We did not rush right out & get married because God showed us something.

There was an age difference that I was not comfortable with but you know it was more than that. I knew Julie to be the far better Christian than me. That is still true today. I was not sure I deserved her. I was not certain I was a good enough man for her. There is not a week that goes by that I don't say, "God, I do not deserve my wife but I am not returning the gift that You gave me."

That is what Julie is to me. A gift from our Father.

Last night as I sat on the porch waiting for Julie to come home I felt a sadness & I drifted to questioning myself, which I am apt to do. I have always been my own worse critic. I found encouragement as I sorted through my thoughts when I came to a simple fact.

I still wrestle at times like many of us that say in our mind we know God loves us but it does not always make the journey to our heart. Why is it I can see Julie as someone that God loves dearly & not so much myself? Just because I may view Julie as more deserving of God's love does not mean that is how it is.

I was given a gift by my Father. Wow! I am closing in on a pretty big number. I will be sixty years old in another year. We have been married now for over two years & we have been together almost three years. Our first date. The seven hour coffee as it is referred to now is just around the corner. Next Monday, October 26.Hopefully, when people see us together they say, "Wow. If that is not God I don't know what it could be."
Gifts are suppose to be fun, right? So are relationships.
My gift, Julie. I love you Baby.
Happy 3 years (almost) 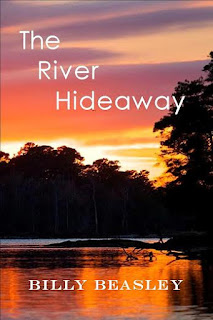 Posted by billybeasleyblogspot at 7:20 AM 5 comments: