I place no value on being Democrat or Republican. What I value is fairness. What Kathy Griffin did was wrong & I would feel the same regardless of whose image was displayed.If you think that it is okay because you dislike Donald Trump so much than in the sense of fair play how would you feel if it were Hillary, Obama, Bernie...take your pick? Be honest. Honesty, especially the ability to be honest with yourself is something I value greatly.
There are people who excuse her actions because of their hatred of President Trump. I hesitate to write anything even remotely political. Last year during the craziness of election time I posted nothing on the race. I made a couple of comments on other people's page. Nothing in support of one candidate. I was mistakenly called a liberal & another told me they were disappointed in me. Both mistook my comments to mean something they did not. That is what happens when you become zealous about politics or anything else for that matter. You react first..You think later..One person apologized. One did not. That is okay.
At one point this year I took several weeks off from Facebook. I grew weary of the ugliness. One astute poster wrote that they found they were spending so much time on blocking or deleting people because of their comments. I found myself doing the same.

Post about politics if you must but try to be fair. If it is okay that a bloody photo of  a dead Trump is posted  than I expect you to feel the same if it is Obama, Hillary, etc. If you are okay with it being one of them but angry if the same thing is done to someone else than you have lost me.

Occasionally, I think about posting something political, not in support of a candidate but just in a sense of fair play. The edge people perch on is so precarious that no doubt I would be called names & judged even if they thought for a moment that I did not agree with their entrenched stance.

For instance if I were to comment about  people who say if Trump is elected I am leaving the country. My comment would be, "No you are not. You are being overly dramatic."
But I feel the same way if anyone was to say if Hillary were elected I am leaving the country. But when people are just waiting to engage they don't take time or at least ask if that is what was meant. Shoot first. Ask questions later.

Personally, I find it hard to believe that you could look at our state of politics today & be proud of either party. I am still waiting for one of our senators or representatives to say we receive way too many perks & that money could be better spent. Where else can you spend such a short amount of time & receive benefits for life?
So take time to think before you respond. Being a Democrat or a Republican or an Independent like myself does not make you right. It is your opinion. Don't value it more than you should. 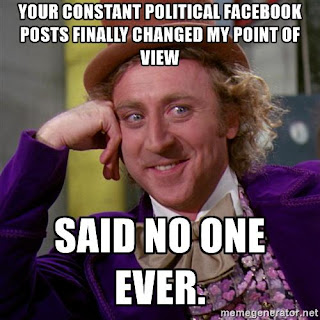 I don't know if someone has said this before or maybe said it better but I posted a short comment on my Author Page not long ago. I would like to think it contains some wisdom.


"Imagine if we respected other's opinions as much as we value our own."

I wish we could all live by the above statement. Be kind to each other. Respect other people's opinions even if they don't coincide with our own.  Imagine if our politicians would try to live that way.

As for me I will return to posting puppy photos or trying to encourage people. During my absence from Facebook I was touched that a few people contacted me & said they missed my encouraging posts. That was very humbling. My dear friend, Nicky, once said that being encouraging is the greatest of spiritual gifts. There is a lot of wisdom in that & I have come to agree with my wise friend.

But I sure wish we could start a Facebook Friendly Friday. No politics.
Teke says, "Hi." 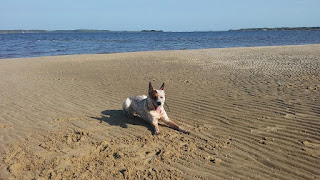 Posted by billybeasleyblogspot at 9:45 AM