Fishhook, Teke & Was it a Miracle from God?

Teke, our Australian Cattle Dog, turned five months old yesterday. We have had her since she was two days shy of eight weeks. It has been an eventful three months to say the least. It had been decades since my wife Julie & I had dealt with having a puppy. I forgot the joys of it. ;)

We have been over protective & I have been a chronic worrier over her safety. It has been just shy of two years ago that we lost Sydney-Julie's rescue Chihuahua mix that I fell deeply in love with when he came to live with me. It was a two way street. I can't seem to escape the worry that came from Sydny dying hours after surgery to remove a pit that lodged in his intestine. 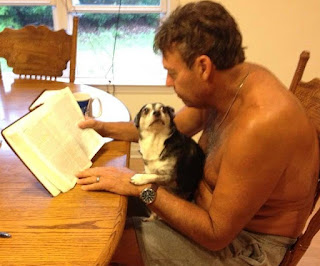 There was the day that I was walking Teke in our neighborhood on her leash when a large dog-maybe 100 pounds charged Teke with intent to maim. I had no time to think-only to react & spin her away from his charge into my arms. Fortunately the negligent owners of the aggressive dog got there in time to prevent a second charge. I had bad images for a long time over what could have been. The part that got to me the most & that I choked up about when I told Julie later that night was when I was still holding Teke long after the incident & discovered my shirt was wet with my then 14 pound puppy's urine.

The fish hook incident I will leave for you to decide. Miracle, luck that either can or can't be explained. I am all ears. For the record, I don't go around claiming everything is a miracle or the devil is hiding behind every bush.

It was several weeks ago & Julie had taken Teke to Carolina Beach State Park & allowed her off lead near the river. No big deal I had done the same thing the week before. Teke found a dead fish in the marsh & you know how a little puppy will eat about anything. She ate a big chunk of the fish before Julie could catch her. Julie came home & washed Teke & herself to remove the rancid smell. Julie called the Vet & they said to keep an eye on her & if she started to vomiting or got diarrhea to bring her in.

Fast forward about 14 hours later to the next morning at sunrise. We wake up to the sound of Teke throwing up. Julie reaches her first & ask me to take her outside to see if she has finished. She had. Julie cleaned the kennel.

As Teke & I reentered the house I hear Julie sobbing loudly in the bedroom. I rush to her & this was the following conversation.

Me: What is wrong?
Julie: She swallowed a fish hook.
Me: What? I am pretty sure there was a head shake of disbelief at one point. Is it all there?
Julie is holding a pillow from the kennel & presses it toward me. Yes. Look.

Was it my prayer over Teke the previous afternoon that she would not be sick or injured from the fish? Could it be traced back to the day we picked her up at Sleepy Hollow Cattle Dogs where my son, Micah drove to meet us? Before we left the farm & Micah was to return to Raleigh & Julie & I to Carolina Beach-I retrieved the bottle of anointing oil I had placed in the side door of my truck & prayed over her protection. I even reminded God that the last time I did this over a dog that it was Sydny & he died. Why one prayer granted & the other not I have no clue. That is why He is God & I am not. His ways far higher than mine- even if I don't always care for the result. And I don't always care for the result.

Julie called the Vet with the update. They asked the same question many of you have. She swallowed the entire fish hook & it all came back up in tact? Yes & yes. They even called twice the next week to check on Teke. I think they had a hard time understanding.

Later as we had time to process & this is the part that makes me believe it was a miracle from God & not ridiculous luck. I ask Julie who has a good medical background. "Did you check her tongue, gums, cheeks, throat-basically everything you can see?"

She had as I knew she would & what she found was not one scratch. Not one drop of blood. That is so much like God because when He does something He does it completely. Perfectly. I probably would have still believed it was a miracle-if say she got a nasty cut on her tongue in the process but for there not to be one mark. Not a moment after throwing that entire fish  hook back up that had been inside of her for approximately 14 hours did she show the first sign of anything other than complete wholeness.

You take from this what you will. I know what I believe & in case you have to ask she is not allowed off lead near the river any longer. 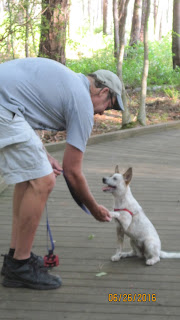 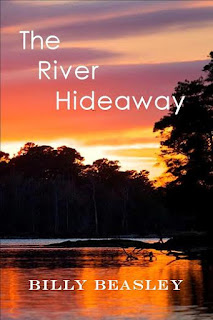 Posted by billybeasleyblogspot at 8:03 AM