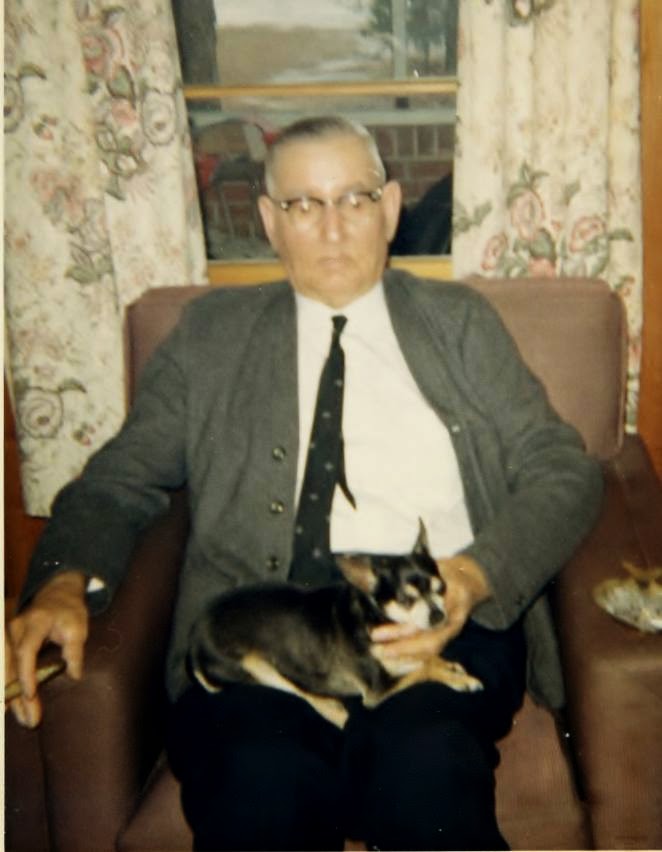 The above quote is attributed to the man in the photo. He was my Grandad, Jack Rogers. Many people referred to him as Papa Jack and that was not limited to family members. The dog in his lap, Tootsie, was my dog but make no mistake she loved Papa Jack more than anyone. I was not even a close second.

Papa Jack wore a white shirt & tie daily as he is in the photo. This was even after he retired in the early sixties from running the Fish Market on Oleander Drive in the community of Sea Gate. He & my Grandmother, Ruth Rogers owned the store together. Those of you that have read The River Hideaway might recall I based the character of Vicky on my Grandmother.

Papa Jack had little in the way of education and he was a simple man in many ways. Look at the photo again and look at his right hand. That is a Tampa Nugget Cigar. It was also part of his daily routine to enjoy a few of them each day.

There was much racial conflict in this area when I was a boy. Wilmington was in the national news for being placed on curfew after a riot broke out. If memory serves me correctly I believe the National Guard was brought in just as it has been this week in Baltimore.

I lived right across the field from my Grandparents and I often sprinted to spend time with my Grandmother. She was my hero. She still is.

On this particular night my grandparents were watching the news and I recall seeing fires and racial conflict play out on the little black and white screen. I can't say for certain what event this was. But I do recall with clarity that my Grandad, as he was watching, very simply stated,  "Good & bad in all. Good & bad in Black...Good & bad in White."

I have never forgotten that statement. Very simply stated, true, & full of wisdom. That was how he viewed things. I wish everyone might have seen things that simply.


As a little boy, I don't think I was aware & even if I was I don't know if I would have grasped the magnitude of something my Grandad routinely did as part of his business. He delivered fish to black neighborhoods. He often sat and shared coffee, or a meal.

My sister Kay, the family historian, added another part to this story. Grandad treated all of his customers fairly and that included extending credit regardless of race.

Mom often remarked that she believed that Grandad truly did not see color. I think considering the times, it is easy to say that is remarkable but I also just believe that it is right.

I was a young man when Grandad passed away. My Grandmother, preceded him in death. One particular memory that brings a smile to me was during my early years as the Park Supervisor for the Town of Wrightsville Beach. I was enjoying a conversation with an older black man, who worked for the Public Works Dept. He was from the area as most of us were back then. We swapped stories of where we grew up and I asked him about the fish market. I don't recall much of the conversation but I do recall what he said when he discovered that I was the grandson of Jack Rogers. "Mr. Jack was your Granddaddy! He was a fine man."

I wish I could write that in my youth I saw no color-that I never joined in nor spoke some of those horrible words that flowed so freely and sadly still do. Deep down I did not hate because of a difference in color but I also was prone to believe some of the stereotypes expressed by those around me.

I have shared liberally that I had a powerful Damascus Road moment as a young man. In the blink of an eye I encountered God, or more likely He encountered me. As I began my often failed walk with Him-from that moment the light went on in my heart I knew without anyone telling me that God did not see color. His love shared equally and gracefully. Nothing else could possibly make sense.


One of the greatest blessings for me is hearing comments from people-even Christians that I know & respect, who have read The River Hideaway. They have said things like it made them question whether they truly believed that hearts have no color.  Were they without prejudice in the eyes of God?

I spoke to a group recently about my novel and I was approached by a man afterwards. He was nice-not contentious in the least. He said he grew up here just as I did but he still believed in separate but equal. He was not angry. He was just sharing and he did so quite cordially.

Later that night my wife, Julie and I discussed this encounter. She had witnessed the entire conversation. I wondered why he felt the need to share his views. Julie looked at it far differently. Jule's viewpoint was yes the man & I grew up here during similar times & obviously we viewed things differently. But maybe, just maybe, the man went  home and thought about the conversation.

Papa Jack did that for me once. He said something that made a little boy think and I have never forgotten it. 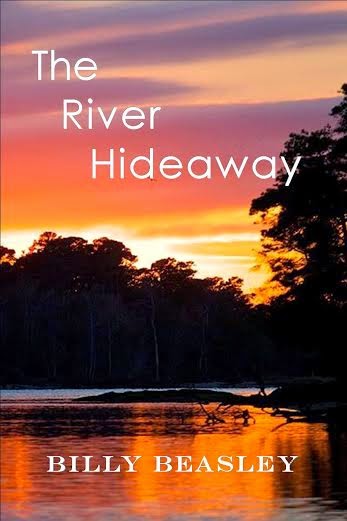 Posted by billybeasleyblogspot at 7:08 PM