The previous blog I wrote, as I commented later was not at all what I sat down to write.

What I took from that blog and I think there will be more to write about in a different format than this was the comments on Facebook about how people were so glad I was not on that boat. It really made me think.

Maybe I could have recovered from being on that boat eventually but it is certain that I would not have the life I am blessed to have now. Sometimes we (I) get caught in this thinking that I am just one person and not all that special. Sadly there is the other side of people that do so much damage because they become arrogant in their walk with the Lord. So as one person we can do good or harm, and we will do both in our lives. We can choose to be humble with the good and take ownership of the harm. I think that best.

Your comments made me think of that wonderful Christmas Movie, "It's a Wonderful Life." 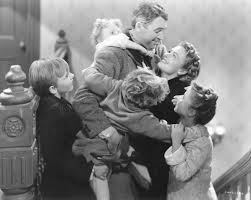 One person removed due to bad choices or one person willing to go where he or she is led.


I thought what if I would have been on that boat. What good and bad would not have happened not only for me but for others.

1. I would not have Micah Beasley as my son.
2. I would not have my later in life gift of my wife Julie who exceeds this dreamer's dreams.
3. It might well have destroyed my mom long before dementia cruelly grasped her.
4. I would not have worked 32 years as a Park Supervisor and have a pension today that enables me to pursue my dream of writing full time.
5. I would not have so many of the wonderful friendships and relationships that I treasure today.
6. I would not have had the privilege of kids calling me "Coach"  for 20 years.  And even as adults, some in their forties now, and I am still "Coach" to them. Some have wrote me of  how they have taking lessons taught on a basketball court and applied them to real life. What greater compliment could I ever be paid? It humbles me beyond belief.
7. There is a good chance I would not even be here.

These are but a few examples if I would have been on that boat. I could write one hundred good and bad and not touch the subject.

Jesus Christ saved me but Ed Wilson rescued me.

"It's a Wonderful Life," Isn't the best part of that movie when his brother Harry rushes in and toasts his big brother George, "the richest man in town."
Posted by billybeasleyblogspot at 7:08 AM